Interested in campaigning for harm reduction in your country? Find out more here.

Why do we need action?

Harm reduction is an evidence-based and cost-effective approach. It aims to keep people who use drugs, their families and communities safe and healthy.

Harm reduction is about saving lives and it works!

A review published in The Lancet warned that global coverage of harm reduction interventions is critically low, with only 1% of people who inject drugs living in countries with high coverage. Moreover, the UN target to halve HIV transmission among PWID by 2015 was spectacularly missed and new HIV infections among people who inject drugs increased by one third between 2011-2015.

Harm Reduction International’s research shows that funding for harm reduction in low- and middle-income countries (LMICs) totalled US$188 million in 2016, the same amount as in 2007 and just 13% of the $1.5 billion that UNAIDS estimates is required annually by 2020 for an effective response in LMICs.

In many countries, spending on drug control exceeds investment in harm reduction – globally, governments spend at least $100 billion every year on drug control.

HRI and the Burnet Institute found that redirecting just 7.5% of this $100 billion toward harm reduction services would lead to a 94% reduction in new HIV infections among people who use drugs and a 93% drop in HIV-related deaths by 2030.

These figures are a call to action!

What are we calling for?

HRI’s 10 by 20 campaign calls on governments to redirect 10% of the funding that they currently spend on drug control to lifesaving and cost-effective harm reduction interventions by 2020. This is consistent with UNAIDS recommendation that governments “undertake a rebalancing of investments in drug control to ensure that the resources needed for public health services are fully funded”.

To date, over 1,500 individuals and organisations have endorsed 10 by 20 campaign messages, including the former president of Switzerland Ruth Dreifuss and former UN Secretary-General Kofi Annan.

What will this achieve?

Even this small redirection of funding could achieve big results.

A 10% redirection of funding from drug control to harm reduction by 2020 would:

What will happen if we don’t act now?

Unless the funding landscape for harm reduction changes urgently, the SDG goal to end AIDS by 2030 and commitments from the 2016 UN General Assembly Special Session (UNGASS) on drugs will come and go as others have and the pledge to 'leave no one behind' will ring hollow. People's lives depend on action being taken. 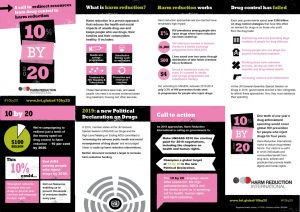