The 2013 conference will be held in Vilnius, the vibrant and historic capital of Lithuania, from the 9thto 12th of June. As Lithuania assumes the Presidency of the European Union on July 1st the same year, the conference will take place at a moment when the eyes of Europe and or the world will be focussed on Lithuania as never before. 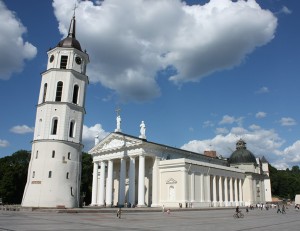 Vilnius, the capital of Lithuania, is one of the most frequently visited cities of Eastern Europe. It draws attention, not only because of its unique architectural character, but also by its cultural events and attractions.

During the first ten years of independence the city has become a tourist attraction centre. It is, therefore, not surprising that during these ten years the number of tourists has consistently increased and at the same time tourist infrastructure and services have been developed.

Vilnius, as the capital of Lithuania, is the home of the President, the Seimas, the Government and the Supreme Court. Diplomatic missions, educational, cultural, financial, research, and health care institutions are based there.

It is also the largest city of the country. According to the 2010 census, the population of Vilnius is 560,000 people, which accounts for 17 per cent of the total population of the country. Vilnius is home to people of different ethnic backgrounds. Ethnic Lithuanians – 57.8%, Poles – 18.7%, Russians – 14%, Belarusians – 4%, Jews – 0.5%, and representatives of other ethnic backgrounds account for the remaining 5%.

Vilnius occupies an area of about 400 square kilometres of which 20.2% approximately is developed and the remainder is green belt (43.9% approx.) and water (2.1% approx.). The historical centre of Vilnius, the Old Town, (Senamiestis) is one of the largest old town centres in Eastern Europe (covering almost 360 hectares). The Old Town is situated in a picturesque valley of two rivers – the Vilnia and the Neris, at the crossroads of trade roads, next to the ford, which was guarded by Vilnius castle in the olden times.

More information about Vilnius will be available shortly but in the meantime please refer to the official tourism website for Vilnius. 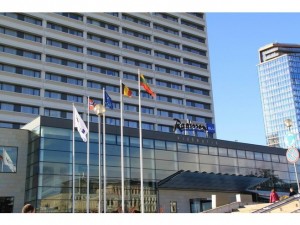 Rising high above the city on the banks of the River Neris, the Radisson Blu Hotel Lietuva, Vilnius offers four-star accommodation in Lietuva. Only a 10-minute walk from one of the most acclaimed historic preservation districts in Eastern Europe, the hotel affords easy access to Old Town as well as to the capital city's business centre. Guests of this hotel in Vilnius can choose from 291 guest rooms and suites designed in an elegant Scandinavian style as well as enjoy easy access to some of the city's top attractions, including the Presidential Palace, St. Anne's Church and Vilnius Cathedral. Thoughtful amenities include Free high-speed Internet access. Enjoy international and Scandinavian cuisine in the hotel's superb restaurant. Excitement awaits in the hotel casino. The hotel also offers a fitness centre, beauty salon and flexible, expansive meeting space.

Ideally situated near the capital city's business district, the Radisson Blu Hotel Lietuva, Vilnius is perfect for both business and leisure travellers. Only a short walk from the architecturally distinctive Old Town, a Unesco World Heritage site, the hotel offers guests superb modern convenience amid such historic and cultural attractions as the Presidential Palace, St. Anne's Church and Vilnius Cathedral. Easily accessible to public transport, the hotel is located five kilometres from the bus and train stations and nine kilometres from Vilnius International Airport.