Russia, human rights and the building understanding of harm reduction and the right to health 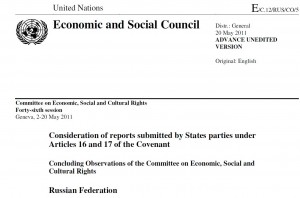 The UN Committee on Economic Social and Cultural Rights has just days ago released its ‘Concluding Observations’ on Russia’s implementation of one of the core UN human rights treaties – the International Covenant on Economic, Social and Cultural Rights. The treaty, agreed in 1966, sets out the clearest articulation of the right to health in international law and has been ratified by 160 UN member states.

Every five years States that have ratified the Covenant must report to the Committee on progress towards implementing the obligations they have taken on board. Over the past eighteen months the Russian Federation has been going through this process. HRI has been involved, as part of an initiative led by the Andrey Rylkov Foundation for Health and Social Justice, submitting information on harm reduction in the country.

In 2010 members of the Committee visited Russia to meet with people who use drugs who spoke about their experiences of Russian anti-harm reduction and anti-HIV prevention policies. The visit was co-ordinated by the Andrey Rylkov Foundation with the assistance of the UN Office on Drugs and Crime, Moscow Office. The effect of this is visible in the concerns raised by the Committee to the Russian government and the recommendations.

Noting its concerns about the “growing epidemic of HIV/AIDS, hepatitis C and tuberculosis in the Russian Federation”, the Committee went on to say that it “remains concerned about the continued ban on the medical use of methadone and buprenorphine for treatment of drug dependence and the fact that the Government does not support opioid substitution therapy (OST) and needle and syringe programs which are strongly recommended by WHO/UNAIDS, UNODC, and other international organizations, as effective measures for prevention of HIV/AIDS among injecting drug users”

This concern was made in relation to article 12 of the Covenant – the right to health. It follows previous recommendations from this Committee relating harm reduction (Tajikistan 2006, Ukraine 2007, Poland 2009, Kazakhstan 2010, Mauritius 2010) but this is a first for two reasons:

First, the Committee deals with a ban on opioid substitution therapy and calls explicitly for law reform to rectify the situation, strongly recommending that Russia “provide clear legal grounds and other support for the internationally recognized measures for HIV prevention among injecting drug users, in particular the opioid substitution therapy (OST) with use of methadone and buprenorphine, as well as needle and syringe programs”

Second, the Committee recommends legal grounds and other support for "overdose prevention programs" as a requirement of the right to health. While overdose has been raised on rare occasions by other human rights monitors (e.g. the Committee on the Rights of the Child in relation to Norway in 2010) this is the first time is has been explicitly connected to the right to health under the Covenant on Economic Social and Cultural Rights so that people who use drugs “do not forfeit their basic right to health”.

What we have seen in the past five years or so is therefore a building body of jurisprudence from this UN (quasi judicial) Committee on the normative content of article 12 of the Covenant on Economic Social and Cultural Rights as it relates to drug use and harm reduction. From these latest recommendations and those referred to above, we find that article 12 requires, at the least:

Harm Reduction International is proud to have been involved in the Poland, Kazakhstan, Mauritius and Russia processes, working closely with national and regional partners.