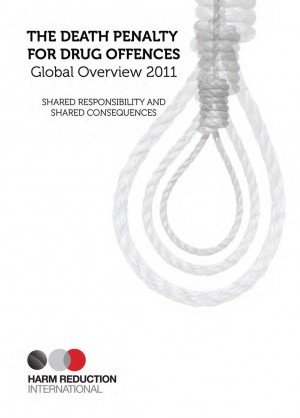 Thursday, September 15, 2011 (London, UK) – A survey of countries that enforce the death penalty for drug offences reveals that in many nations the majority or even entirety of those facing execution are foreigners.

In a follow-up to its landmark survey on the death penalty for drug offences, Harm Reduction International reveals that in many of the 32 nations or territories that have capital drug laws in force, the vast majority of those executed or facing death are from abroad.  [SEE APPENDIX]

There arehundreds, if not thousands, of non-nationals who are facing or have faced the death penalty for drugs in recent years including citizens of Australia, France, Israel, Liberia, Mexico, Mongolia, The Netherlands, Nepal, Nigeria, Peru, The Philippines, Sweden, Turkey, United Kingdom, United States, Zambia and many more.

'This report should encourage governments to reflect on their counter-narcotics assistance to states which continue to sentence people to death for drug offences,' said Rick Lines, executive director of Harm Reduction International. 'No government in the world can say with absolute confidence that these laws won't potentially lead to a death sentence for one of its own citizens. What we would not impose at home, we should not expose people to abroad.'

In its report, The Death Penalty for Drug Offences – Global Overview 2011: Shared Responsibility and Shared Consequences’, Harm Reduction International reveals that there were hundreds of executions for drug offences in the past year. Moreover, the organisation estimates that the number of people executed for drugs every year likely surpasses a thousand when states that keep their death penalty figures a secret are included.

These executions are carried out in direct violation of international law that limits the legal application of capital punishment. UN human rights monitors have also expressed their concern about the number of foreigners represented on death row.

Many governments claim to retain the death penalty primarily for drug offences as a means of deterring trafficking and drug use in their countries. There is, however, no credible evidence that the death penalty for drugs is an effective deterrent.

'Drug policies must respect human rights, international standards and proven public health measures to be effective,’ said Lines ‘It is simply wrong for a government to try and kill its way out of a drug problem. These killings are arbitrary and morally repugnant.'

Patrick Gallahue, a human rights analyst for Harm Reduction International and researcher on the report said, ‘These incidents demonstrate the need for international standards to be respected when governments work together to address transnational issues.’

Key findings of the report:

The lawful application of capital punishment is significantly restricted under international law. Article 6(2) of the International Covenant on Civil and Political Rights states that the penalty of death may only be applied to the ‘most serious crimes’. Over the past twenty-five years UN human rights bodies have interpreted Article 6(2) in a manner that limits the number and type of offences for which execution is allowable under international human rights law.  While many retentionist governments argue that drug offences fall under the umbrella of ‘most serious crimes’, this is not the perspective of the UN Human Rights Committee or the UN Special Rapporteur on extrajudicial, summary or arbitrary executions, both of which have stated that drug offences do not constitute ‘most serious crimes’ and that executions for such offences are therefore in violation of international human rights law. This is supported by international State practice given the small minority of countries retaining capital punishment for drugs. In recent years there has also been increasing support for the belief that capital punishment in any form violates the prohibition of cruel, inhuman or degrading punishment, as enshrined in numerous UN and regional human rights treaties, and customary international law.

Patrick Gallahue, Human Rights Analyst and author of the report

Harm Reduction International is a leading non-governmental organisation working to promote and expand support for harm reduction worldwide. We work to reduce the negative health, social and human rights impacts of drug use and drug policy – such as the increased vulnerability to HIV and hepatitis infection among people who inject drugs – by promoting evidence-based public health policies and practices, and human rights based approaches to drug policy.