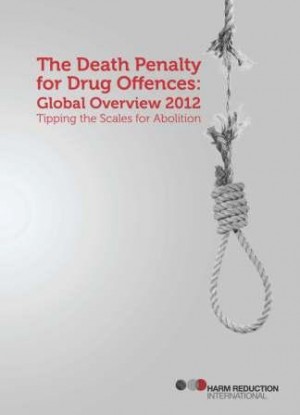 Over 540 people executed for drugs in Iran in 2011, a trend continuing into 2012 and a five-fold increase since 2008 says a new report released today at the UK House of Lords.

No executions in Indonesia or Thailand since 2008 and no recent executions in Malaysia pending mandatory death penalty review indicate regional progress towards abolition.

Report launched as first execution takes place in Pakistan since 2008.

Tuesday, 20 November 2012 (London, UK)-- Executions for drug offences have escalated in countries such as Iran and Saudi Arabia against a trend towards abolition globally, reveals a new Harm Reduction International (HRI) report launched today at the House of Lords in London. (1)

The Death Penalty for Drug Offences, Global Overview 2012: Tipping the Scales for Abolition (2) reveals that over 540 people were executed for drug offences in Iran in 2011, a trend that continues in 2012 and represents a five-fold increase since 2008. At least 16 people were executed for drugs in Saudi Arabia in the first six months of 2012, compared with one person in 2011.

Death sentences have tripled in Pakistan from at least five in 2009, to at least 16 in 2011. The report coincides with Pakistan’s first execution since 2008. A former soldier convicted of murder in 2008 was executed on November 15th. British national, Khadija Shah, is among those imprisoned in Pakistan for alleged drug offences and faces the death penalty.

The figures come against a backdrop of declining political will by a growing number of South East Asian countries to enforce their own capital drug laws. There has been an absence of executions in Indonesia and Thailand since 2008, and Malaysia and Singapore have taken steps in 2012 to review the mandatory death penalty for drug offences.

Despite the absence of executions, increasing death sentences handed down in Malaysia remain a concern, with the number increasing year on year since 2009.

Two significant exceptions in the region are China and Vietnam where data on the death penalty remain a state secret, thus hiding the true numbers of those sentenced and put to death. Executions are known to have taken place in both countries and China is widely considered to execute the more people than any other country.

“While there is cause for optimism on some fronts, hidden behind the statistics is a truly horrifying picture of inhumane drug enforcement,” said HRI Executive Director Rick Lines. “The identities of many of those sentenced to die or executed are rarely made public but in those few instances when the details are revealed, the same pattern emerges - the condemned are very often poor, disadvantaged and desperate.”

The report says that while alarming numbers of people have been sentenced to death and executed for drugs worldwide political efforts and legal challenges in recent years have increased the potential to reduce the amount of people facing the death penalty for drugs in the future. Tipping the Scales for Abolition documents four high profile court cases that challenged the death penalty for drugs in India, South Korea, Singapore and Indonesia. Two were successful – in India and South Korea judicial discretion won out over the mandatory death penalty.

“Politically, governments seem increasingly uncomfortable with the death penalty for drug offences,” said Baroness Vivien Stern, Chair of the All Party Parliamentary Group on the Abolition of the Death Penalty, speaking at the report´s launch today in the House of Lords event. “Even Malaysia, which many see as a very repressive state on drug laws, is currently debating whether to remove the mandatory death penalty, and has placed a moratorium on executions until that decision has been made. This is very encouraging. But there is much more to be done.”

Key findings of Tipping the Scales for Abolition include:

* Fewer than 10 countries in fact carried out executions for drug offences in 2011/2012, confirming international movements away from the practice.

* No executions for drug offences in Malaysia, Indonesia or Thailand in 2011/2012, but death sentences continue to be handed down in high numbers in Malaysia (at least 83 in 2011).

* Among the small group of states carrying out executions, many hundreds were put to death - the majority in China and Iran.

* In Iran executions for drugs have increased five-fold since 2008 to over 500 per year (in both 2010 and 2011), often without fair trial. Public hanging are common and execution rates have remained high in 2012.

* Beheadings for drug offences have taken place in Saudi Arabia. At least 16 people were executed in the first six months of 2012, a considerable increase compared with one person executed for drugs in the whole of 2011.

* Data on the death penalty remain a state secret in China and Viet Nam meaning that the true number of those sentenced and put to death is unknown. China is widely considered to remain the country that executes the most people each year.

The release of Tipping the Scales for Abolition comes amid concerns raised by Harm Reduction International, Human Rights Watch, Amnesty International, Reprieve and other human rights groups about millions of dollars in bilateral and UN drug enforcement aid to death penalty states, including Iran (3). The intention of the financial and technical assistance is to help seize drugs and arrest suspected traffickers, but the groups say that such assistance legitimises the ongoing killings of those convicted and may be facilitating the capture of individuals later put to death.

“Khadija is just one of the many victims of the hugely destructive war on drugs. Just twenty-five years old, she is imprisoned in infamous Adiala jail in Pakistan, in fear for her life and that of her newborn child, also incarcerated with her” said Maya Foa of legal action charity, Reprieve, which is assisting Ms Shah.

“Donors and the UN Office on Drugs and Crime are effectively legitimising the death penalty at crucial time, when every effort is needed to move towards abolition,” concluded Lines.

Date: Tuesday, 20 November 2012
Time: 6pm-7.30pm
Venue: Committee Room 4A, House of Lords
Chair: Baroness Vivien Stern, Chair of the All Party Parliamentary Group on the Abolition of the Death Penalty

(4) UN Office on Drugs and Crime Project PAK/J61 was a four-year, $3 million USD project that started in 2007 and was funded entirely by the government of Canada. This project aimed at strengthening government capacity at international transit points, including airports, in Pakistan. The project provided the national Anti Narcotics Force and other law enforcement agencies with screening equipment, such as x-ray machines, as well as urine-testing equipment, at national airports including in Islamabad where Ms Shah was arrested. Recent funding for drug enforcement in Pakistan through UNODC has come from multiple donors including Denmark, Germany, Australia, and the UK.

Harm Reduction International is one of the leading international non-governmental organisations promoting policies and practices that reduce the health and social harms associated with drug use and the negative social, health, economic and criminal impacts of drug laws and policies on individuals, communities and society. Our vision is a world in which individuals and communities benefit from drug laws, policies and practices that promote health, dignity and human rights.
www.hri.global