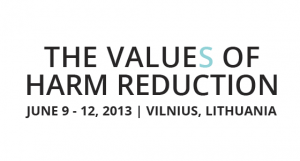 Lithuanian pop stars Erica Jennings and Jurgis Didžiulis (The Ball and Chain) confirmed as patrons of the event.

The 23rd edition of the International Harm Reduction Conference is expected to attract up to 800 scientists, politicians, researchers, welfare workers, doctors and drug user activists, from around 60 countries. The three previous editions of the conference took place in Beirut, Lebanon (2011) Liverpool, UK (2010) and Bangkok, Thailand (2009).

“We’re delighted with Professor Kazatchkine`s participation in the event this year especially given the critical nature of the HIV epidemic amongst people who inject drugs in the Eurasian region,” said Rick Lines, Executive Director of Harm Reduction International (HRI), convenors of the conference.

The conference will focus on key issues affecting the international harm reduction response including the retreat of donors, the lack of national government funding for harm reduction, as well as the influence of repressive law enforcement and human rights abuses that currently take place in the countries of Eurasia.

The theme of the Conference 2013 is 'The Value/s of Harm Reduction'. The theme calls on the urgent need to provide sufficient political and financial support to address the HIV epidemic driven by injecting drug use in many parts of the world, as well as the ethical basis of the harm reduction philosophy.

“The conference also sends a warm welcome to the Lithuanian Minister of Health Vytenis Povilas Andriukaitis and thanks him for his timely commitment to attend the conference,” said Serge Votyagov, Executive Director of the Eurasian Harm Reduction Network (EHRN), the local partners of IHRC 2013.

Popular Lithuanian pop group The Ball and Chain have also agreed to become patrons of the conference, confirming their long term commitment to HIV/AIDS over the years.

“The issue of drug use is something we need to speak about more openly in Lithuania,” said Jurgis Didziulis, The Ball and Chain’s co founder. “Drug users are often treated as second rate citizens and ignored. There is a need to engage with them and see the issues confronting them as a public health concern rather than taking a criminalising approach.”

To join the conversation, please visit our Facebook page. Updates on the campaign are publicly available on our Twitter Feed or via the hashtag #IHRC2013.

Conference programme updates can be downloaded at www.hri.global/conference

Registration is free to all accredited media. To register please email media@hri.global

HRI works to reduce the negative health, social and human rights impacts of drug use and drug policy – such as the increased vulnerability to HIV and hepatitis infection among people who inject drugs – by promoting evidence-based public health policies and practices, and human rights based approaches to drug policy.

The Eurasian Harm Reduction Network (EHRN) is a regional network with a mission to promote humane, evidence-based harm reduction approaches to drug use, with the aim of improving health and protecting human rights at the individual, community, and societal level.