Lithuania - see it, feel it, love it! 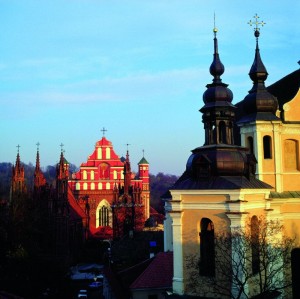 Lithuania - see it, feel it, love it!

“Amber is a big part of Lithuanian heritage, a national asset, and in the tiny Amber Museum Gallery Jurassic Park style pieces of amber with mosquitoes, shells and spiders preserved inside them for 50 million years”;

“Nearly 30 per cent of the country is under the forest and one can travel for miles through tall pine trees and not see an open field”;

“For moments felt like the Dune itself moved for the rhythm of the wind with a zig-zag dancing steps learned in the best local Latin salsa club”;

“National parks are also plentiful in Lithuania but Grutas Park is a strange one. From 1989-91, many of the monuments of Stalin and Lenin from the Soviet years were taken down and collected here instead of being destroyed. It's like Disney World for despots.”

Lithuania is proud of its objects included into the UNESCO World Heritage List: Vilnius Old Town, cultural landscape of Curonian Spit and Kernavė Archaeological Site that reflects the lifestyle of the Middle Ages city of the last pagan country in Europe – as well as of cross-making craft and cross symbolism one can familiarize with by visiting Hill of Crosses located in Šiauliai district, Song festivals and folk glees.
Moreover, in Lithuania one will find Grūtas Park which is among the top ten of the World’s weirdest museums as well as dozens of other interactive and unique museums where one can not only see expositions but also participate in educational programmes, for instance, bread baking, cheese making, etc. In Vilnius Old Town one can see architectural ensembles of castles, churches and monasteries, university and noblemen’s palaces as well as residential buildings that have preserved the beauty of the Gothic, Baroque or Classicist styles or a combination thereof. In addition, Lithuania intensely maintains the manorial heritage and adapts it to tourism - traditions of playing music are revived and parks are restored.

The largest Lithuanian cities are modern ones with green spaces and plenty of cultural and historical objects as well as with well cared for old towns. Vilnius’ Užupis, the former outskirts of craftsmen, with its bohemian atmosphere reminds of Montmartre of Paris. The capital’s Old Town is lined with narrow streets and specialized shops. Huge trade centres and pavilions stand in other parts of the cities. Various cultural events take place in leisure time. Performances of Lithuanian opera and Jazz musicians are highly valued. Lithuanian theatre has old traditions as well. Night clubs, coffee-bars, restaurants, concerts, festivals and many more are in a kaleidoscope of the dynamic night life.

Lithuania has great golf courses, bicycle routes and developed tourism by kayaks and adventure parks. One has an opportunity to ride horses, stay in camping or even to rise above Vilnius Old Town in a hot air balloon. Lithuania also has “Snow Arena”, the only winter activities complex under a roof in the Baltic States that works all year round, as well as aqua parks that offer various entertainments. Sailing in a yacht or sightseeing on a ship, cod fishing at sea, riding a water motorcycle or even search for amber await one at the seaside. Windy coasts are loved by kite surfers and enthusiasts of land yachts. Rural tourism homesteads offer plenty of summer pleasures and as much temptations in winter: one can jump into an ice hole after a good steam bath, drive a sledge pulled by horses or dogs or a snowmobile.

• WELLNESS AND SPA: therapy of amber and mineral water

For weekends and longer periods of time Lithuania offers health resorts that have been operating for 200 years and are located not only by the sea but also within the territory of national parks or by lakes. Health centres of the resorts provide plenty of procedures that can be categorized into kinesitherapy, psychotherapy, massages, therapeutic baths, therapeutic mud treatments and mechanical physiotherapy. Druskininkai resort has the oldest wellness traditions in Lithuania. There are 7 mineral springs in the town and the latest diagnostic and treatment technologies are applied in the health resorts. Here one will find the widest assortment of health services and experience healing effects of mineral, oxygen, herbal, mud or other baths and enjoy aqua massages, honey masks, pleasures of salt chambers and oil therapy. Birštonas is situated in the Nemunas Loops Regional Park. Its SPA centres invite you to try milk or wine baths and natural medical mud. Neringa in Curonian Spit is called Lithuanian oasis – the narrow and lengthy peninsula, washed by the Baltic Sea and Curonian Lagoon, reminds one of a desert with fishermen villages. Palanga - the most popular Baltic sea resort with white sand beaches, dynamic and full of attractions.

Lithuania is situated in the geographical centre of Europe. Four international airports operate in the country. There are flights from 60 European cities and the largest transit centres. The country has the most developed road and motorway network in the Baltic region. It is convenient to organize both large and smaller scale conferences in the capital of Lithuania. 5 thousand people can participate in such events in Vilnius Exhibition Centre LITEXPO. Judging on the number of events and the area of expositions this centre is the largest one in the Baltic States. Normally, the largest hotels have great conference centres for 1-2 thousand participants. Unconventional spaces such as old palaces, manors or castles, art galleries or theatre halls are also available for meetings or conferences.

The mobile connection 100 % covers the whole territory of Lithuania and wireless network is available in the majority of hotels, coffee-bars and other public places visited by tourists. Speaking of the Internet speed, our country holds the leading positions in the world.

Culinary tour across Lithuania. Travel with a spoon! Lithuania also pays attention to the global tendencies in the tourism sector, thus, opens up culinary (gastronomic) tourism possibilities: invites to try authentic, ecological or slow food and to familiarize with historical cuisine traditions.

Not many know that grand dukes of Lithuania and other representatives of the nobility were relatives to highborn European families, therefore, the dishes they ate were also royal. In the XIV-XVIII c. the noblemen’s cuisine was known for abundance of herbs, grains, vegetables, game meat (venison, boar meat, hare meat). Swans, pigeons, thrushes, fish, wine, mead and liquor were served on their tables. Modern Lithuanian restaurants still offer noble menus. When in the XIX-XX c. the Polish-Lithuanian state collapsed and peasant cuisine established itself, Lithuanians mastered food smoking traditions using various woods. Sausages, skilandis (pig stomach stuffed with minced meat mixed with garlic), smoked bacon and fish became popular. Beer was then started to be brewed and people drank fresh or fermented birch or maple sap. Potato dishes (cepelinas (potato-meat dumplings), potato pancakes, potato pies and vėdaras (potato sausages) are an exceptional feature of the modern Lithuanian cuisine. Lithuanians are proud of their cold soup, dark rye bread, curd cheese and honey as well as mushroom and herring dishes and kastinys (sour cream butter). These are dishes that one can try in no other country. Moreover, the country’s drinking water is one of the best in Europe. Urban citizens get water from deep artesian bores. Such water is protected from environmental pollutants and is rich in minerals.

Unique international initiative – worldwide tourist route “Amber Road”. Lithuania has introduced a worldwide tourist route “Amber Road” to the tourism market with the aim to offer exceptional and interactive destination for tourists from around the world. The project was presented during the international conference “Past-Present-Future: Cooperation along the Historical Amber Road” organized in cooperation with the UN World Tourism Organization and held in Vilnius in June this year. After receiving active international support, in particular from state tourism agencies of Russia, Kaliningrad and Saint Petersburg, at the moment the initiative is already being implemented: material is being placed on a website which will attractively present products, services or objects directly or indirectly related to amber, amber heritage, amber processing, amber industry, etc. that are available on the participating countries’ tourism markets. In the project “Amber Road” Lithuania presents not only unique amber from the Baltic Sea and a geographical section of the ancient trade Amber Road which lies in a 98 km long coastal zone, but also “amber” SPA procedures (massage, sauna), usage of amber acid in cosmetics and culinary, amber jewellery, design, incense, etc.

Meanwhile, a record increase of tourism flows (even 20.3 per cent) in 2011, and 12 per cent in 2012 has led Lithuania to the second place in terms of Europe. Isn’t it a good boost for you to discover Lithuania?!