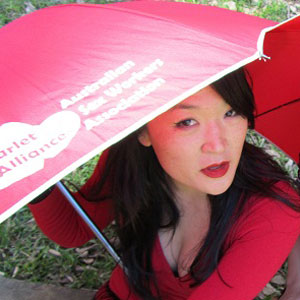 Jules has been a member of the National Roundtable on Human Trafficking since 2009 and is currently involved in the communication and awareness raising strategy working group for Australia's National Action Plan on Trafficking, ensuring that migrant sex worker voices are present in anti-trafficking discourses. From 2009, Jules was the coordinator of the Migration Research Project, the largest research project of migrant sex workers in Australia to date, in partnership with the Australian Institute of Criminology. In 2014 she was the coordinator of the Sex Worker Pre-Conference and Sex Worker Networking Zone at the International AIDS Conference. In 2015 she has also taken on the role of Coordinator of the Scarlet Alliance National Training and Assessment Program. She has written and presented on a range of issues including sex work, migration and community mobilisation and advocacy both in Australia and abroad and provided testimony and submissions at government hearings in relation to human trafficking, law reform and sex work.