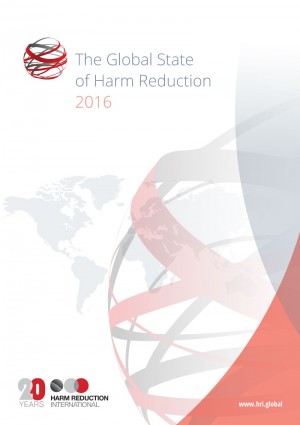 Services to reduce drug-related harms are failing to keep up with growing need, despite pledges to combat AIDS among people who inject drugs

The drive to scale-up needle and syringe programmes and opioid substitution therapy for people who inject drugs has stalled, according to a new report released today by Harm Reduction International (HRI).

Despite a UN pledge to end AIDS by 2030, no new countries have established needle and syringe programmes (NSP) since 2014. Out of 158 countries where injecting drug use is reported, 68 still do not provide NSP, while opioid substitution therapy (OST) has been initiated in just three new countries (Monaco, Senegal and Kenya), bringing the total to 80.

Since 2006 HRI has tracked a slow but steady expansion of services through its biennial Global State of Harm Reduction report. 2016 is the first year where no new countries have initiated NSPs. In some countries NSP and OST site provision has fallen since 2014.

Report author Katie Stone said: “The 2011 UN target to halve HIV among people who inject drugs by 2015 was missed by 80%. Now people who inject drugs are being ever further left behind. In addition, emerging trends such as rising rates of amphetamine injection and overdose death are likely to see the challenges intensify. Without increased political and financial leadership we will not end AIDS or meet other global goals relating to people who use drugs.”

HRI raised concerns when UNAIDS recently cut its only staff post on HIV and drug use. Since then, the agency has reduced funding to a special unit working on HIV within the UN Office on Drugs and Crime, threatening the end of UN efforts to combat HIV in prisons. Global State data shows that only eight countries provide NSP in at least one prison, and 52 OST, despite the fact that up to 90% of people who inject drugs will be incarcerated at some point, and that HIV and hepatitis rates are higher in prisons.

Stone said: “Despite this, today’s report demonstrates that harm reduction is not a fringe position. Harm reduction services are now available in over half of the 158 countries with documented injecting drug use. Where they have been adequately scaled-up, HIV and Hepatitis C rates have plummeted. HRI is calling on governments and the UN to redirect their attention – and their funding – away from the war on drugs and into harm reduction.”

Statistical modelling by HRI and the Burnett institute suggests that by redirecting just 7.5% of the estimated $100 billion spent each year on drug enforcement to harm reduction, we could virtually end AIDS among people who inject drugs by 2030, as well as rolling out Hepatitis C treatment and medicines such as Naloxone which can reverse opioid overdose.