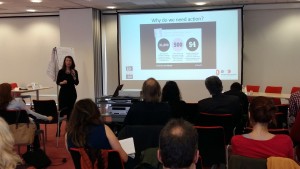 Harm Reduction International is calling for a redirection of funding from drug enforcement to harm reduction. But in order to identify how much funding is needed for harm reduction in any one country, it is necessary to establish the gap between current spend and need. This is fraught with challenges, including poor data on drug use and HIV and hepatitis C epidemics, a lack of transparency and disaggregation of government and donor spending records.

Harm Reduction Works! is a two-year EC-funded project coordinated jointly by HRI and the Eurasian Harm Reduction Network to help overcome these challenges in EU states. It is investigating harm reduction investment across the EU, identifying gaps and successes and making recommendations for sustainability.

The Southern Europe event, co-organised with APDES, was held at the University of Porto in Portugal on 29 September. Research findings from Greece, Italy and Portugal were shared with a diverse group of harm reduction practitioners from Southern EU states, as well as Portuguese researchers, drug user activists, journalists and policy makers from the Socialist Party, Left Block, Green Party and Communist Party. Participants had the opportunity to learn from the experiences of neighbouring countries and to share strategies to ensure sustainable funding for harm reduction.

Fivos Papamalis spoke of decreasing investment in Greece leading to dangerously depleted harm reduction services. Susanna Ronconi described uneven harm reduction spending in Italy where funding allocations are determined by the support of regional decision makers. Marta Pinto told us that despite drug decriminalisation and political support for harm reduction, precarious funding is affecting the quality and coverage of harm reduction services. The event was covered in the Portuguese media.

A similar event was held in Budapest on 26 October, bringing together harm reduction civil society and policy makers from Eastern EU countries. Speakers presented national case studies highlighting relatively well supported programming in Estonia and the Czech Republic and some political progress in Lithuania, starkly contrasted by a funding crisis and intense political resistance to harm reduction in Hungary.

This event also brought policy makers Jindrich Voboril, National Anti Drug Coordinator in Czech Republic, and Ken‐Marti Vaher, Member of the Estonian Parliament and Minister of Health when Estonia first began to fund harm reduction services to give their testimonies on prioritising state investment in harm reduction and share lessons learned from their respective countries. Both highlighted the de facto decriminalisation of drug use and personal possession as an important step in shifting towards a harm reduction approach, and shared compelling data on the impacts and cost effectiveness of harm reduction.

"The war on drugs has failed, a drug-free society is an illusion ... we should focus on reducing the harms!" Jindrich Voboril, National AntiDrug Coordinator, Czech Republic.

They also offered to visit other countries or to host delegations from elsewhere in the region with a view to advocating for increased harm reduction funding, a suggestion that was enthusiastically received by all participants.

HRI’s report on harm reduction investment in the EU will be published in early 2017.

This project is co-funded by the European Union under the Drug Prevention and Information Programme.