Drug Offences and the Death Penalty in Malaysia: Fair Trial Rights and Ramifications 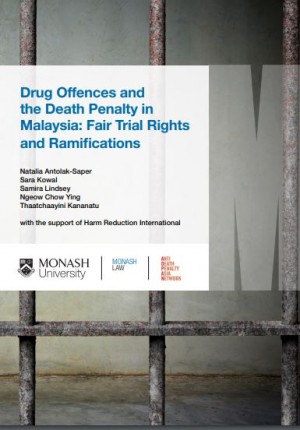 When this research project started, the economic and political context was very different – both at the global level and in Malaysia. Just a year ago, a government was in power in the country which had announced a moratorium on executions, which had taken significant steps towards death penalty reform, but also steps towards a reform to its drug policy towards a human rights and health-centred approach.

A year later, the political landscape in Malaysia is now very different. This change in environment may make advocacy harder, but should not be a reason in itself to stop pushing for and moving these reforms forward. it is still possible to go beyond politics and find an agreement on what is sensible and urgent, especially at a time where a significant shift in resources may be necessary.

Indeed, one thing that the death penalty and drug policy have in common is that, although they were both construed as political issues, and to some extent they are, they don’t necessarily need to be dominated by politics. For both the death penalty and drug policy, there is strong scientific evidence about what works and what doesn’t that can inform discussions and allow to reach agreements.

For drug policy, what works is a health-centred approach that focuses on the health and rights of people who use drugs, their families, and their communities. When such an approach is not followed, we end up confronting human rights violations as well as poor individual and public health results.

For the death penalty, evidence is now abundant that capital punishment is simply ineffective. The death penalty for drugs has been in place in the region for decades now, and still drug production and trafficking continue. In fact, governments' and UNODC data tell us that trafficking is in fact increasing.

So, a lot of money has been spent, and a lot of harm has been caused, with no tangible result. In addition, retaining the death penalty constitutes an obstacle to multinational cooperation on drug trafficking, so a retentionist country is actually worse off than an abolitionist country when it comes to confronting this kind of organised crime.

One reason why the death penalty for drugs doesn’t work is that it doesn’t have any impact on the so-called "organised crime elites", those who profit the most from trafficking - but rather targets the most vulnerable and marginalised in society and in the drug hierarchy.

We see highlighted in the report some exemplary cases of capital drug defendants. None of them is a high-level figure, someone with decisional power in the drug hierarchy. They all are - if guilty at all - low level offenders.

One case highlighted is that of Huang Ziling. Huang is a Chinese woman, accused of trafficking 1.4kgs of methamphetamine. She worked as a waitress and had never travelled outside of China in her life. One of her clients offered her a well-paying job - 10,000 yuan (1300 euros) - to transport children’s items and clothing outside of China. She agreed to the job. They met in a restaurant where the employer gave her a bag, showed her the inside of the bag - she only saw toys and pencils - then told her she immediately had to go to the airport. She rushed to the airport, alone, for the first time in her life, and when she arrived in Malaysia she was stopped. Some markers were found inside her luggage, which had drugs concealed inside.

That the death penalty for drugs disproportionately impacts on the poor and vulnerable is not because of some terrible mistake or some unintended and unforeseeable consequence, but rather the direct result of how drug laws, including Malaysian law, are designed.

First of all, the gravity of the crime is proportional to the quantity of drugs one is found in possession of. This may seem normal and obvious, but it actually makes little sense when we realise that those who carry most drugs and risk the most are not the top-level figures but rather the most vulnerable in the drug hierarchy. Nobody with power agrees to carry drugs across borders. It will be easily replaceable and expendable people who are coerced, tricked, or pushed into trafficking by economic need or circumstances.

Secondly, this report show how critical a good lawyer is in a capital case, especially from the early stages of the investigation. However, good lawyers and good experts are expensive, and drug couriers often don’t have the resources and connections to afford one, especially if they are foreign nationals. Funding for legal aid in Malaysia is critically low, and this puts those who need a public defence most at most risk.

There are then issues with specific provisions - in the Malaysian case for example the double presumptions of knowledge and possession, that shift the burden of proof onto the defendant. Those provisions were found to be unconstitutional by a court presided by Justice Malanjum, but the consequences of that judgment are unclear.

Also, the mandatory nature of the death penalty which has remained in most drug cases despite the 2017 reform, and prevents judges from considering any mitigating circumstance

The compounded effect of all these measures and provisions is a fundamentally unequal and unjust process.

In conclusion - it's undeniable that we are now in a very particular political moment. It's also undeniable, looking at the evidence, that the system as it is doesn’t work. It's costly, it's ineffective, it's harmful, it's illegal under international law -  and this has been acknowledged by most countries around the world.

This report has exposed significant flaws in the Malaysian system, that cannot be fixed with minimal or piecemeal reforms; we have already seen the limitations of this approach in the shortcomings of the 2017 amendment. The only thing that can be done at this point is abolition of the death penalty, and drug policy reform.

Malaysia has already taken important and bold steps in this direction and could in this way become an example for other countries in the region, so we hope this report will inform discussions and help policymakers take this last decisive step.