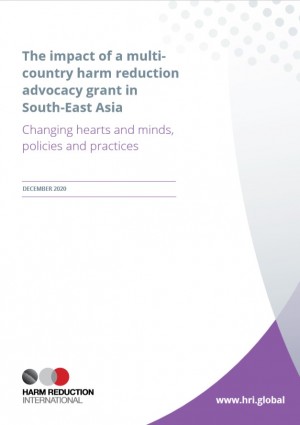 In the Asia Pacific region, people who use drugs accounted for 17% of new HIV cases in 2019. People in Asia who inject drugs – around four million in total – are more likely to be living with HIV than any other key population in the region, with HIV prevalence at about 13.5%.

As part of the Sustainable Development Goals (SDGs) and the 2016 Political Declaration on HIV and AIDS, countries have committed to ending AIDS, eliminating hepatitis C (HCV), and attaining universal health coverage by 2030. Harm reduction programming is essential for countries to achieve these goals.

Harm Reduction Advocacy in Asia, or HRAsia, is a Global Fund multi-country grant that has provided funding and technical support for advocacy in Cambodia, India, Indonesia, Nepal, the Philippines, Thailand and Vietnam. The programme focused on removing legal barriers, community systems strengthening and the gathering and use of strategic information for advocacy. It has helped to change hearts and minds, and ultimately policies and practices related to drug use and harm reduction. Communities of people who use drugs have become more meaningfully involved in advocacy and service provision.