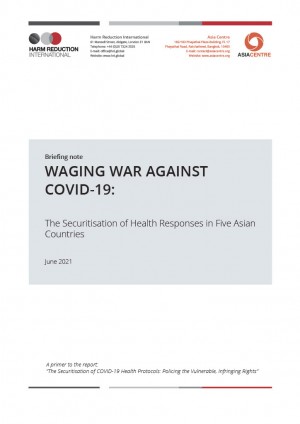 Since early 2020, countries have experienced an exponential rise in COVID-19 related infections and deaths. In an attempt to respond to this unprecedented spread of a deadly disease, governments around the world have invoked emergency executive powers, and/or adopted exceptional measures.

In many cases, these have resulted in an expansion of law enforcement powers, in some cases in parallel with the side-lining of public health authorities. The necessity and effectiveness of such strategies have been heavily criticised, particularly in light of reports of abuse of force, arbitrary arrests and detention, and targeting of already marginalised, vulnerable, or overpoliced communities (including ethnic minorities and migrant workers).

A review of the laws, policies, and practices introduced in five Asian countries (Indonesia, Malaysia, the Philippines, Singapore, and Sri Lanka) to respond to the pandemic suggests a tendency of governments to over-rely on law enforcement authorities, both in the development and in the enforcement of the responses. Initial findings indicate that in all five countries the overarching authority is usually an inter-ministerial ‘national task force’ composed of ministers and top civil servants, often led by military or other law enforcement personnel.

*This briefing is a primer to the upcoming report, The Securitisation of COVID-19 Health Protocols: Policing the Vulnerable, Infringing Rights