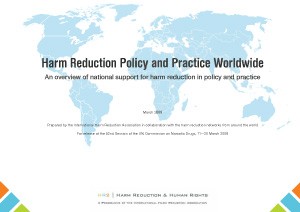 This new document – entitled Harm Reduction Policy and Practice Worldwide: An overview of national support for harm reduction in policy and practice – lists the countries and territories which currently support harm reduction in their national health or drug policies, as well as those that employ key harm reduction interventions such as needle and syringe exchange and opioid substitution therapy – both within and outside of prison settings. Countries and territories which have safer injecting facilities are also listed.

The table shows at a glance the extent to which harm reduction is a global approach. It is a tool to be used by those advocating for the adoption and expansion of harm reduction measures, and was prepared to inform government delegation negotiations on the new political declaration on drugs (which will be adopted at the High Level Segment of the Commission on Narcotic Drugs in Vienna in March 2009). This declaration will influence the next ten years of international drug policy, so it is a crucial time to demonstrate the global appeal of – and support for – the harm reduction approach.