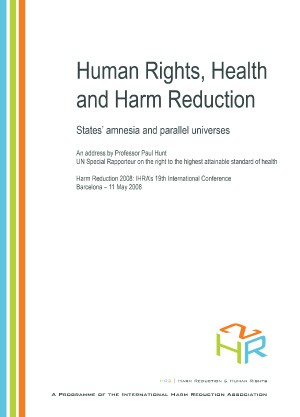 The speech began by listing some of the human rights abuses experienced by people who use drugs, and then went on to criticise the international policy environment that allows human rights abuses to occur with relative impunity. Professor Hunt recognised the ‘amnesia’ of many countries which acknowledge their human rights obligations in one forum (such as the Human Rights Council) and then go on to ‘forget’ them at another (such as the Commission on Narcotic Drugs) - a situation that he described as ‘bizarre’. Professor Hunt then confirmed that drug policy must be carried out in conformity with human rights.

Acknowledging the necessity of harm reduction as an aspect of the right to health, Professor Hunt suggested that the overarching goal should be “a strong, accessible, integrated health system that is sensitive to the distinctive needs of all, including people who use drugs”. He encouraged advocates and activists to incorporate human rights mechanisms at the international level into their existing and ‘inspiring’ work in order to help to achieve this.

Harm Reduction International’s HR2 (harm reduction and human rights) team decided to publish the speech in order to make it accessible to people who did not attend the conference, and so that these extremely helpful comments from a high level UN human rights expert may be made available for use for advocacy purposes and referenced in future publications.