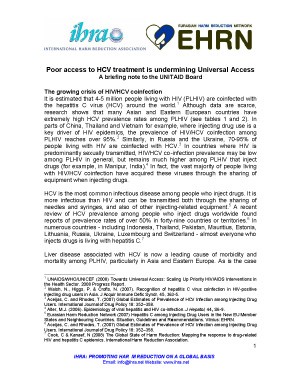 Hepatitis C (HCV) is the most common blood-borne virus among people who inject drugs. In some parts of the world, over 90% of people who inject drugs are living with hepatitis C. The liver cirrhosis and cancers caused by HCV infection are a leading cause of death among people who inject drugs, particularly those living with HIV. Access to effective HCV treatments around the world is currently very poor due to the prohibitive cost of the medication. Harm Reduction International, with support from the Eurasian Harm Reduction Network, prepared a briefing paper for a meeting of the UNITAID Civil Society Delegations who were discussing this issue in December 2009. Shortly afterwards, the briefing paper was translated into Russian by EHRN for use at the Georgian Harm Reduction Conference in February 2010.