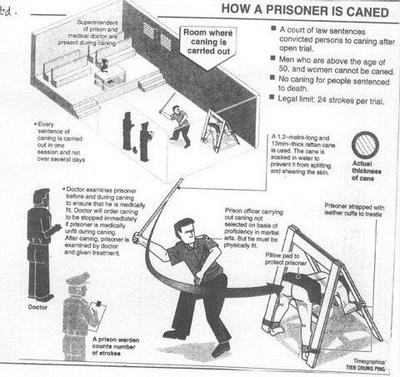 Singapore's high commissioner to the court of St. James's and ambassador to Ireland replied to Harm Reduction International's op-ed in the Guardian this weekend in his own article titled, 'Singapore's policy keeps drugs at bay'.In the piece, Mr. Michael Teo attempts to justify Singapore’s radically harsh drug policies, which include some of the world's most ferocious capital drug laws as well as corporal punishment.

He wrote: ‘Drug traffickers are a major part of the problem on the supply side. They make drugs available in our communities and profit from the human misery they help create. This is why tough laws and penalties are needed, including capital punishment for trafficking in significant amounts of the most harmful drugs. This sends a strong deterrent signal to would-be traffickers. But unfortunately, attracted by the lucrative payoffs, some still traffic in drugs knowing full well the penalty if they get caught.’

The entire piece can be read here.

Mr Teo made a number of claims in his piece that warrant a response – which we posted in the comments section and will now repost here.

In our response we wrote: Mr Teo states that ‘Singapore has one of the lowest prevalence of drug abuse worldwide’. Singapore often makes this claim to justify its harsh drug laws. However the government does not make available any reliable data on drug use in country, making this statement impossible to be independently tested.

Earlier this year, the Reference Group to the United Nations on HIV and Injecting Drug Use found Singapore to be one of the only countries in Asia that did not have reliable data on rates of drug injecting among its population. When our organisation, the International Harm Reduction Association, compiled the Global State of Harm Reduction report, we likewise were unable to find any reliable data on drug injecting in the country.

In place of independently verifiable data, Mr Teo cites information found in the World Drug Report 2008, published by the UN Office on Drugs and Crime (UNODC). However, rather than being independently produced, the estimates he refers to were provided by the government of Singapore itself.

As described by UNODC, its ‘Report is based on data obtained primarily from the annual reports questionnaire (ARQ) sent by Governments to UNODC’. Therefore, when Mr Teo cites the World Drug Report, he is in fact only citing the official data provided by the government of Singapore itself, rather than data independently produced by the UN. Indeed, UNODC admits that the vast disparity in data quality and collection methods between countries makes comparisons between countries of little value.

If in fact the evidence supported Mr Teo’s claims, we would suspect that the government would publish it. Their failure to do so certainly creates reasonable doubts as to the veracity of such claims, and whether they represent anything more than political ‘spin’ to try and justify a controversial and likely ineffectual policy.

Furthermore, Mr. Teo argues that the death penalty for certain drug offences does not contravene international law. This statement is at odds with the vast majority of United Nations bodies tasked with interpreting international law – including the UN Human Rights Committee, the Special Rapporteurs on torture and extrajudicial executions, among others.

While he cites the 46 countries that voted against the Moratorium on the Death Penalty in the UN General Assembly, that resolution applied to all crimes, including premeditated murder and terrorist offences. It was not a referendum on the mandatory death penalty for drug offences. In any case, the Moratorium was passed not once but twice by the UN General Assembly despite the objections of these countries.

Of those states that retain the death penalty in law, only 32 do so for drugs and most of those do not actually carry out such penalties, much less make capital punishment mandatory. Only about five percent of the world’s countries make impose mandatory capital punishment for drugs in both law and practice. As stated in our original commentary, in this sense Singapore is clearly on the fringe of international death penalty policy.

Finally Mr Teo also raises the issue of deterrence as a justification. However, in the Yong Vui Kong decision the court admitted that it would not be able to assess its effectiveness in preventing drug crimes. The Court of Appeals wrote, ‘It is not within the purview of this court to determine the efficacy or otherwise of the [mandatory death penalty] as a deterrent vis-à-vis the offence of drug trafficking.’ The court cited precedent for this position. In Ong Ah Chuan decision the Privy Council said, ‘Their Lordships would emphasise that in their judicial capacity they are in no way concerned with arguments for or against capital punishment or its efficacy as a deterrent to so evil and profitable a crime as trafficking in addictive drugs.’

In any case, the government of Singapore fails to publish detailed crime data, and data on executions it carries out, makes Mr Teo’s claims about the effectiveness of its policies impossible to test independently. In fact, drug offences of any kind are conspicuously absent from Singapore's official crime data. Given that Singapore's Central Narcotics Bureau regularly reports on major trafficking arrests on its website, this seems an odd omission.

As a result, the offence for which Yong Vui Kong has been sentenced to death does not appear as a crime in Singapore's crime statistics for the year of his arrest (or if it does it is hidden elsewhere, and not recorded as a drug offence.

This isn’t the first time that Singapore has tried to justify its extreme drug policies. Last year, the island-state lashed out at UN Special Rapporteur on Torture, Manfred Nowak, for releasing a report on human rights and drug enforcement to the UN Human Rights Council. The Singapore government wrote that it ‘categorically rejects this or any attempt to impose a policy on sovereign States on how to deal with offenders under their criminal justice system’. It further defended its sovereign right to beat and kill drug offenders.