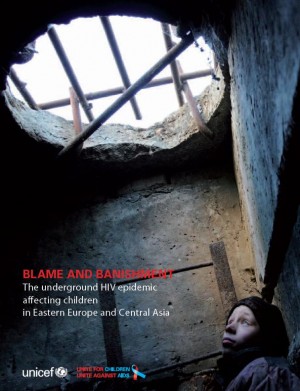 At the XVIII International AIDS conference in Vienna last July UNICEF launched an excellent report focusing on HIV/AIDS among most at risk adolescents in Eastern Europe and Central Asia.

‘Blame and Banishment’ highlights the issues faced by the more than 1 million children and young people who live or work on the streets of the region, as well as adolescents engaged in risky behaviours and pregnant women using drugs. Today, the region is home to some 3.7 million injecting drug users, representing almost one quarter of the worldwide total

Unfortunately, existing health and social welfare services are not tailored to adolescents at greatest risk, who are often exposed to moral judgement, recrimination and even criminal prosecution when they seek treatment and information on HIV. 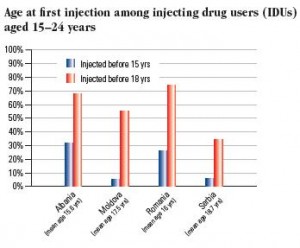 The largest contributor to HIV transmission in Eastern Europe is injecting drug use. A UNICEF multi-country study of young injectors (aged 15–24) found that younger drug users tend to have poorer access to harm reduction services, and in some cases practice higher-risk behaviours. For example, among Romanian injectors, 26.3 per cent of under-18-year-olds were found to have shared injecting equipment in the past month, while fewer than 20 per cent of those 18 and older had done so. In Moldova, where close to a third of the IDUs surveyed were younger than 18, adolescents were more reluctant to obtain clean injecting equipment from exchange programmes, drop-in centres, or outreach workers compared to adults (11.4 per cent vs. 28.6 per cent). Similarly, in Serbia, outreach workers or exchange programmes were a significantly more common source of needles and syringes among older users than younger ones (24.7 per cent vs. 4.8 per cent); younger users were more likely to obtain needles from acquaintances. Adolescents were also less likely to have ever had an HIV test; for instance, in Albania although just over a third (37.3 per cent) of surveyed IDUs had ever had an HIV test none of those under 18 years old had done so.

Much more needs to be done to improve the appropriateness of services for young people and their access to them. The large majority of interventions for vulnerable or high-risk groups in the region are oriented towards adult populations. Civil society organizations working with at-risk populations are often reluctant to provide services to under-age populations for fear of legal or other repercussions, such as accusations by the public of promoting risky behaviours to minors. In some cases a ‘don’t ask, don’t tell’ approach is employed – services are provided without asking questions – however, the problem remains hidden and underground.

At the same time, young drug users may be reluctant to access adult services because of concerns about privacy and confidentiality, or because they feel that peer education messages, designed for older users, are irrelevant to them. Oftentimes, they are right. For example, very few interventions in the region specifically target recent initiates to injecting drug use or those who inject only occasionally. A needle and syringe exchange has little to offer young people who use drugs but do not inject. Methadone treatment may be inappropriate for non-dependant drug injectors. As a result, rates of drug use and HIV risk behaviour are increasing in younger populations.