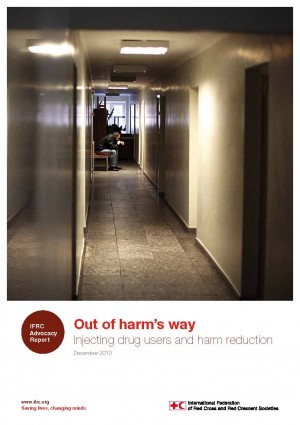 To mark World AIDS Day 2010, the International Federation of Red Cross and Red Crescent Societies (IFRC) have released a report highlighting the failures of governments and donors to effectively tackle HIV and injecting drug use, and the urgency with which a human-rights based, effective response is needed.  A central message of the report is the importance of prioritising harm reduction over the criminalisation of drug use – because “it works and is a human-rights based approach”.

‘Out of Harm’s Way’ outlines the severity of the epidemic and the human rights violations routinely faced by people who inject drugs around the world. Amongst the report’s several recommendations are the decriminalisation of drug users, as well as access to due legal process and health services for those who use drugs both within, and outside prisons and other closed settings. It calls upon all stakeholders, but particularly governments, to respect the human rights of people who inject drugs and those at risk of, or living with HIV. Highlighting the poor investment made to date, the IFRC also calls upon governments and donors to exert all possible efforts to make comprehensive harm reduction programmes available to drug users, and in particular to commit to predictable long-term funding.