Annual report of the International Narcotics Control Board: Corruption, human rights and OST 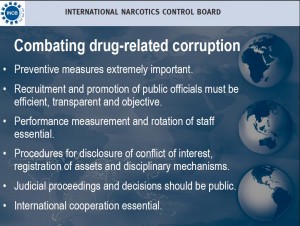 The International Narcotics Control Board yesterday presented its annual report for 2010. Every year the Board selects a thematic issue of focus, dedicating its opening chapter to that issue. This year it is corruption.

In an earlier blog post we asked whether the INCB would have the impartiality to be able to look at the drug control system itself, and its role in the generation of corruption, as the UNODC had done in 2008. The answer is no. At no point is the international criminal market in drugs recognised as a creation of drug control.

The Board does, however offer a number of recommendations for tackling drug-related corruption. Summarised in the INCB President’s presentation of the report on March 2nd, an interesting exercise is to apply these recommendations to the INCB itself.

Recruitment and promotion of public officials must be efficient, transparent and objective

This stands in stark contrast to the elections of the INCB. Though elected by ECOSOC Member States, the candidacies and voting processes are relatively closed, and mired in political horse-trading

There are no term limits on the INCB. Some members have served for well over a decade.

And how is the Board held to account for its activities? This is difficult to ascertain when even meetings are held behind closed doors. (See further recommendation no. 4). Compare the ongoing discussions on treaty body reform in the UN human rights system.

Procedures for disclosure of conflict of interest, registration of assets and disciplinary mechanisms

INCB members should be impartial. The late Professor Dmitrieva, however, was both a long term INCB member and a Russian Government representative. This was both contrary to the Single Convention on Narcotic Drugs and to this basic anti-corruption recommendation.

Judicial proceedings and decisions should be public

The Board has been widely criticised for its secretive operation, in stark contrast to other similar mechanisms in the UN system. It is, we should recall, a quasi-judicial mechanism.

We are not suggesting that the INCB is corrupt, but the recommendations are widely known and oft-repeated measures for transparent and accountable institutions. The INCB should listen to its own advice.

The remainder of the INCB annual report is much the same as previous years. ‘Harm reduction’ does not appear at all this time (even in inverted commas), although the Board does note without comment programmes in certain countries. This lack of consistent comment, positive or negative, however, is a serious flaw and discrediting element in the Board’s reports.

But it is when the Board expresses satisfaction without any form of human rights scrutiny that we see serious, harmful, shortcomings:

Para 540. In Singapore, where diversion and abuse of buprenorphine had been a problem, a significant decline in such illicit activities became evident in 2009, owing to new legislation enforced in 2009 and stricter penalties imposed by the Government for illicit activities involving that substance

Para 574. The Board notes with satisfaction the continued efforts of the Government of Maldives to address the growing problem of drug abuse.

Satisfaction? Maldives imposes a mandatory minimum five year sentence for possession of up to 1g of any drug; over that counts as trafficking, with a 12 year minimum. There is also a ‘use’ offence which also has a mandatory 5 year minimum. So, someone found in possession of cannabis, and whose urine tested positive, gets 10 years. Most drug users do not receive legal representation. About 80 percent of people in prison are there for drug-related offences. There is a compulsory rehabilitation programme linked with the criminal justice system. Maldives also allows for judicial corporal punishment – 40 lashes.

Tremendous efforts resulting in (now well over) 28,000 deaths. And no commentary on this? Compare to the UN Human Rights Committee review of Mexico in 2010 and the Committee on the Rights of the Child review in 2011.  The Board is known for its poor reputation in human rights – this year’s report does not help. Such comments only provide cover for abusive policies via apparent UN approval.

Availability of controlled drugs for medical and scientific purposes – OST?

A welcome addition this year is, of course, the supplement on availability of controlled drugs for medical and scientific purposes. Here, the Board is contributing to human rights progress, it must be said. The supplement goes into much detail on various kinds of medical uses of controlled substances. There is, quite rightly, a lot of attention to opiates for pain relief. And there are segments on other drugs and medical uses such as stimulants used as anorectics.

Substitution therapy, however, is not a focus and only referred to in passing. This is unfortunate given the important role of these medicines in treating opiate dependence, reducing overdose related deaths and in the response to HIV/AIDS. That access to opiates for pain is needed for a greater number of people is irrelevant to the proven clinical requirement of these drugs and their status as essential medicines.

According to the Board “adequate availability of medicines, including narcotic drugs and psychotropic substances, is an essential part of [state] responsibility towards their populations” (para 130 suppl).

As such we have two questions relating to methadone and buprenorphine:

With that in mind, consider the Board’s comments on Russia from the annual report:

Para 708. In June 2010, the Government of the Russian Federation adopted the State Antidrug Policy Strategy of the Russian Federation for the period 2010-2020.  It is the first comprehensive document consolidating the Government’s efforts to prevent the spread of drug abuse in the country. The Strategy aims at suppression of the illicit production of and trafficking in drugs, reduction of drug demand  by  improving  the  system  of prevention and rehabilitation activities and development and strengthening of international cooperation  in the  a re a of drug  control.

It also bans OST until 2020. Ten more years of ignoring this responsibility towards their populations, and no comment from INCB

But in the next paragraph (709) the Netherlands gets a knock for coffee shops. All balanced, then