Among the key findings from the 2017 Global Overview report:

The report also reveals a critical tension: the situation is at once improving and deteriorating. On the one hand, recent positive developments provide a glimmer of hope that the tide could finally be shifting. At the national level, executions for drug offences have been steadily declining in High Application States since 2015, and important legal and policy changes have taken place in several countries, including Iran, Thailand and Malaysia.

At the international level, political support for the abolition of the death penalty for drug offences is also gaining considerable momentum. The 2016 UN General Assembly Special Session on Drugs failed to reach consensus on the death penalty for drug offences, but 73 countries expressed strong support for abolition, proving that the issue is firmly on the radar of the global community.

On the other hand, these signs of progress are being overshadowed by the surge in extrajudicial executions of people accused of using or selling drugs in the Philippines. Worrying signs that Indonesia may be adopting a similar violent response, and the explicit support for President Duterte’s ‘war on drugs’ expressed by other countries in the region and beyond, raise serious concerns about whether we are seeing a new trend which could normalise the killing of people for drugs and undo years of steady progress.

Find out more about recent developments in the 2017 Global Overview, available here.

The 2017 Global Overview has been published with support from the European Union.

Download a PDF of "The Death Penalty for Drug Offences: Global Overview 2017" 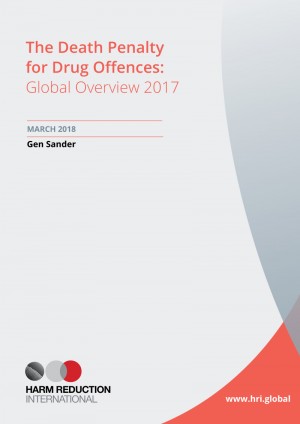 Share these Death Penalty report infographics on your social media