HIV and Injecting Drug Use: A Global Call for Action

The Official Declaration of the 2011 International Harm Reduction Conference

Of the 33.3 million people living with HIV globally, an estimated three million are people who inject drugs.1 They account for 30% of HIV infections outside of sub-Saharan Africa, and up to 80% of infections in Eastern Europe and Central Asia.2 3

The 2001 UNGASS Declaration of Commitment and the 2006 Political Declaration on HIV/AIDS established time-bound targets to be met and reported on by countries worldwide. The commitments aimed to address the needs of people who inject drugs, their families and the communities in which they live through an “urgent, coordinated and sustained response.” 4 5 These commitments remain unfulfilled. People who inject drugs are increasing as a percentage of global HIV infections with devastating consequences for individuals and communities.

The mobilisation of an “intensified, much more urgent and comprehensive response”5 to HIV for people who inject drugs requires strong global leadership, concrete national policies and adequate funds to implement and scale up evidence-based services. The targets and commitments set in the 2006 Political Declaration must be met to address the needs of, and to fulfill the human rights of people who inject drugs living with and at risk of HIV. World leaders gathering at the June 2011 UN General Assembly High Level Meeting on HIV/AIDS must ensure that these commitments are met as a matter of urgency.

At the 2011 United Nations High Level Meeting on HIV/AIDS, we, the undersigned, call for:

A number of commitments made in the 2006 Political Declaration to address the international response to HIV remain unmet for people who inject drugs. Among them:

Commitment: “Ensure that a wide range of prevention programmes...including sterile injecting equipment and harm-reduction efforts related to drug use...is available in all countries, particularly the most affected countries” [paragraph 22]

Of the 158 countries and territories with reported injecting drug use globally, almost half lack essential harm reduction services.6 In most countries where needle and syringe programmes and opioid substitution therapy are available, coverage is still poor, reaching far below the numbers needed to have an impact on the epidemic.7 8 The situation for people held in places of detention is dire. Thirty-nine countries currently provide opioid substitution therapy in prisons, while only ten provide needle and syringe exchange, often reaching small numbers in few institutions.9

Action required: Evidence-based programmes targeting people who inject drugs need to be implemented and scaled up urgently across all settings in order to effectively prevent the further spread of HIV.

Less than 10% of the estimated need for harm reduction funding globally is presently being met. Current expenditure works out to less than three US cents per day per person injecting drugs.10 Approximately US$160 million was spent on HIV-related harm reduction in low and middle income countries in 2007, falling far short of the US$2.13 billion that UNAIDS estimates was needed in 2009, and the $3.2 billion in 2010.11 12

Action required: National and international resources for HIV-related harm reduction must be scaled up as a matter of urgency.

Commitment: “Eliminate gender inequalities, gender-based abuse and violence; increase the capacity of women and adolescent girls to protect themselves from the risk of HIV infection, principally through the provision of health care and services” [paragraph 30]

Women and girls who inject drugs are more vulnerable to drug-related harms, including HIV infection, than are men who inject drugs.13 In a number of regions globally, injecting drug use is often perceived to conflict with the “socially derived roles of women as mothers, partners and caretakers”, exposing them to greater stigma and human rights violations than men who inject drugs.13 14 15 Most women do not have access to services that meet their sexual and reproductive health needs and increase their capacity to protect themselves from HIV infection.16 Incarcerated women who inject drugs face elevated health risks, including HIV infection, than do non-incarcerated women, yet have little or no access to legal frameworks and services that address their particular needs.17 18 19

Action required: Gender-specific services and policies that facilitate their implementation are urgently required to ensure that women who inject drugs can effectively protect themselves from HIV infection.

Commitment: “Address the rising rates of HIV infection among young people to ensure an HIV-free future generation through the implementation of comprehensive, evidence-based prevention strategies” [paragraph 26]

Young people are increasingly affected by HIV and other harms associated with drug injecting.20 21 While we know that early intervention is necessary across age groups, legal barriers often prevent their implementation.22 23 In accordance with recent recommendations by the UN Committee on the Rights of the Child, there remains a need to provide “specialised and youth friendly...harm reduction services for young people” and to “amend laws that criminalise children for possession or use of drugs” in countries where such policies continue to be enforced.22

There is clear evidence that criminalisation of people who use drugs and law enforcement have not only failed to reduce the prevalence of drug use, but have created harms that fuel the HIV epidemic.23 24 25 26 Many countries continue to prohibit the provision of sterile injecting equipment and opioid substitution therapy and criminalise drug possession and paraphernalia.27 Such measures can drive people who inject drugs away from prevention and care services and increase the risk of HIV infection. People who inject drugs face further discrimination in terms of access to effective HIV treatment.28 29 30

Action required: Ineffective and punitive drug policies, particularly criminalisation of drug possession, must be reformed to ensure the realisation of human rights, and to support the implementation of evidence-based interventions for people who inject drugs, as outlined in the Vienna Declaration.31

Commitment: “Eliminate all forms of discrimination against and ensure the full enjoyment of all human rights and fundamental freedoms by people living with HIV and members of vulnerable groups” [paragraph 29]

People who inject drugs, particularly women, continue to experience multiple layers of stigma and discrimination that effectively undermine HIV prevention, treatment and support efforts.32 Severe human rights violations against people who use drugs, such as cruel, inhuman and degrading treatment, arbitrary arrest and detention, and extortion and police violence have been documented widely in a number of countries.33 34 35 36 Record incarceration figures due to drug law enforcement have led to overcrowding and poor conditions in prisons.37 38

Action required: Punitive and discriminatory measures must be discontinued, and adequate resources dedicated to promoting health and human rights-based responses to drug use and HIV. 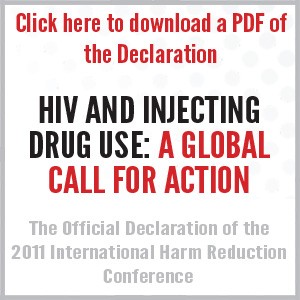