A Broken System: Drug Control, Detention and Treatment of People Who Use Drugs in Sri Lanka

Over the past decade, the government of Sri Lanka has adopted a militarised approach to drug control, with the military playing an increasingly significant role in the ‘war on drugs’. This includes not only participation in anti-drug trafficking operations, but also in drug treatment and prevention.

The militarisation of drug control has accelerated since the November 2019 election of President Gotabaya Rajapaksa, whose election manifesto prioritised eradication of “the drug menace”.1 Since then, the President has formalised the military’s involvement in drug control. Drug use is highly stigmatised, with the government and the media frequently misrepresenting people who use drugs as criminals and a public threat, thereby criminalising and marginalising them. This dehumanising narrative enables widespread violations of the human rights of people who use drugs, with little scrutiny.

A Punitive and Discriminatory Legal Framework

Domestic legislation criminalises the import, export, trafficking, and possession of a wide variety of narcotic substances. It envisages severe and disproportionate penalties, up to life imprisonment and even the death penalty for possession and trafficking of as little as two grams of heroin.

The severity of the penalties depends on the quantity of drugs, and possession of smaller pure amounts of drugs is punished with imprisonment or a fine, with judges enjoying significant discretion. As courts are overburdened and under-resourced, people accused of drug-related offences risk spending weeks or even months in pre-trial detention. For this reason, once brought to court upon arrest, people are incentivised to plead guilty (irrespective of whether they actually committed any offence). This typically leads to them being fined and released; however, those who cannot afford the fine will be imprisoned for up to six months – effectively criminalising poverty.

Certain drug offences are not bailable, resulting in mandatory pre-trial detention – which also constitutes a violation of the right to liberty. Because of under-resourcing and administrative hurdles, the trial can be significantly delayed, with people languishing in pre-trial detention for months. In turn, this leads to severe overcrowding of remand prisons.

Violence and Abuse of Power by Law Enforcement

Systemic shortcomings in law and policy, and a culture of impunity, create space for gross misconduct and malpractices within the Police Department of Sri Lanka, which impact the rights of persons arrested for drugrelated offences. For instance, persons in prison frequently accused the police of planting drugs to frame them; while torture and ill-treatment in police custody, specifically against persons arrested for drug offences, is widely documented. Women, in particular, reported being subjected to invasive body searches upon arrest. It is also common for persons detained for drug offences to be harassed and targeted by police officers after their release from prison.

Lack of oversight of investigation processes enables officers to interfere in drug-related cases by falsifying crucial details with regards to the timing of the arrest, tamper with the chain of custody for drugs seized, and intentionally delay trials

Inhumane Conditions of Detention and Inadequate Response to COVID-19

The large number of persons incarcerated for drug offences has led to the severe overcrowding of all prison institutions in Sri Lanka, with prisoners enduring inhumane conditions of detention and degrading treatment and punishment.

Due to the outbreak of COVID-19 in prisons, the government has allowed the release of people imprisoned for the non-payment of fines and minor offences. Guidelines were also issued in January 2021 to State Counsels instructing them not to object to bail in cases of possession of less than 10 grams of heroin if the person has been in remand for over six months, investigations have been concluded, and other criteria are met. However, in practice, overly broad and arbitrary conditions allow State Counsels to object to bail. This has led to the awarding of bail in drug-related cases being restricted.

There are both state-administered and private drug rehabilitation and treatment centres in Sri Lanka. The two most widely known centres - Kandakadu and Senapura - were formerly used by the military to ‘rehabilitate’ alleged ex-combatants following the conclusion of the armed conflict in 2009, and continue to be operated by the military.

The Drug Dependant Persons (Treatment and Rehabilitation) Act of 2007 empowers police officers to send any person suspected of using drugs for a medical assessment, and produce the person before a Magistrate. The Magistrate can send the person for compulsory drug rehabilitation, either on the basis of a medical assessment of ‘’drug dependence’’, or as a punishment for an offence under the Poisons, Opium and Dangerous Drugs Ordinance. Section 10 of the aforementioned Act allows the police to arrest persons without evidence and arbitrarily detain them, leading to them being sentenced to compulsory drug rehabilitation.

The Community Based Corrections (CBC) Act provides alternatives to incarceration, whereby a non-custodial sanction can be imposed on persons convicted for minor offences for which imprisonment is not a mandatory penalty, and for offences for which the penalty is less than two years’ imprisonment. However, when persons arrested for drug-related offences have a history of drug use or prior offences, the judge may require the individual to undergo mandatory drug treatment as part of the conditions of the CBC order. Although the Act requires the individual to consent to the CBC order, the consent cannot be deemed as free, as refusal to undergo treatment would result in the imposition of a prison sentence. Thus even in this case drug treatment meets the threshold of arbitrary detention.

Ill-treatment and Abuse in Rehabilitation Centres

All rehabilitation programmes at both state and private centres are abstinence-based, and no harm reduction services are provided. Violence is widespread in these centres, either as a form of ‘treatment’ or as punishment. Among others, former detainees report beatings, denial of food, strenuous physical exercise, being tied to trees for long periods of time, collective punishment, and other forms of humiliation.

There is little, if any, post-release support or after-care to support re-integration. People who have undergone compulsory rehabilitation consistently report facing stigma as well as harassment by the police, which in turn hinder social and community re-integration and livelihood opportunities.

View or Download a PDF of HRI's "A Broken System: Drug Control, Detention and Treatment of People Who Use Drugs in Sri Lanka" 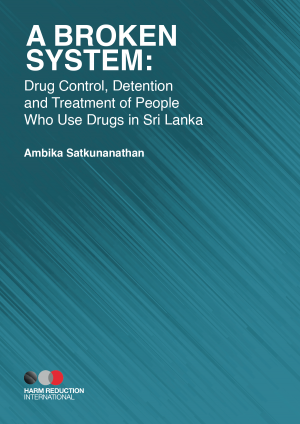 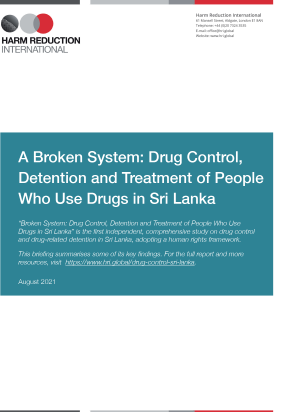 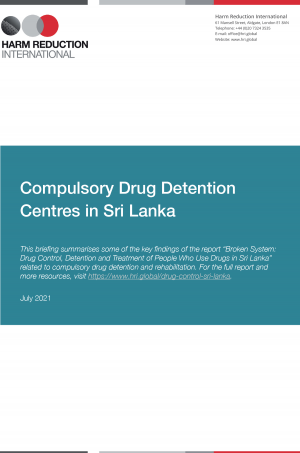