Exacerbating this health crisis are punitive drug laws and human rights violations that several countries in Asia inflict upon people who use drugs. Punitive approaches include forced rehabilitation in compulsory drug treatment centres and in the most extreme cases, the death penalty for drug offences or extrajudicial killings. This environment significantly heightens the risk of HIV among people who use drugs by impacting on their access to HIV prevention, treatment and other lifesaving health services.

Further, coverage of harm reduction services that are proven to stop the transmission of blood borne viruses, such as needle and syringe programmes (NSP) and opioid substitution therapy (OST), remains inadequate.

Harm Reduction International’s (HRI) preliminary research into the harm reduction funding landscape in Asia finds that there is a paucity of funding for HIV prevention, treatment, and care programmes for people who use drugs. 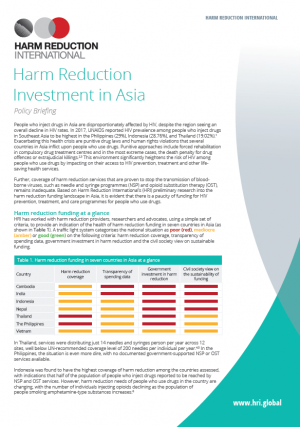