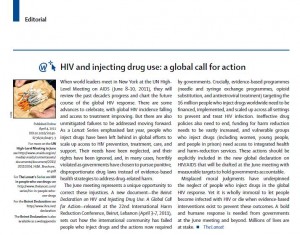 HIV AND INJECTING DRUG USE: A GLOBAL CALL FOR ACTION

When world leaders meet in New York at the UN High-Level Meeting on AIDS (June 8—10, 2011), they will review the past decade's progress and chart the future course of the global HIV response. There are some advances to celebrate, with global HIV incidence falling and access to treatment improving. But there are also unmitigated failures to be addressed moving forward. As a LancetSeries emphasised last year, people who inject drugs have been left behind in global efforts to scale up access to HIV prevention, treatment, care, and support. Their needs have been neglected, and their rights have been ignored, and, in many cases, horribly violated as governments have chosen to pursue punitive, disproportionate drug laws instead of evidence-based health strategies to address drug-related harm.

The June meeting represents a unique opportunity to correct these injustices. A new document—the Beirut Declaration on HIV and Injecting Drug Use: A Global Call for Action—released at the 22nd International Harm Reduction Conference, Beirut, Lebanon (April 3—7, 2011), sets out how the international community has failed people who inject drugs and the actions now required by governments. Crucially, evidence-based programmes (needle and syringe exchange programmes, opioid substitution, and antiretroviral treatment) targeting the 16 million people who inject drugs worldwide need to be financed, implemented, and scaled up across all settings to prevent and treat HIV infection. Ineffective drug policies also need to end, funding for harm reduction needs to be vastly increased, and vulnerable groups who inject drugs (including women, young people, and people in prison) need access to integrated health and harm-reduction services. These actions should be explicitly included in the new global declaration on HIV/AIDS that will be drafted at the June meeting with measurable targets to hold governments accountable.

Misplaced moral judgments have underpinned the neglect of people who inject drugs in the global HIV response. Yet it is wholly immoral to let people become infected with HIV or die when evidence-based interventions exist to prevent these outcomes. A bold and humane response is needed from governments at the June meeting and beyond. Millions of lives are at stake.